The rocky Road through Dublin by Bastian Knüwe 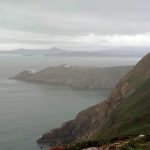 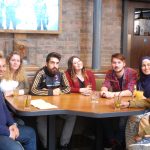 We met on Monday, September the 4th at the Airport of Duesseldorf at about 8 am. As eventually, everybody arrived we checked in and got boarded in a blink of an eye. It was a smooth and steady flight and as we approached Dublin Airport the city was not yet ready to hit a maniac bunch of Germans contemplating to scrape their barrels and invade their gift shops.
We arrived somewhat at Irish time and set up our encampment. To get some camouflage on to move among the inhabitants ease without getting our cover blown, our captain led us to a wicked Bar, where we got served good with foods and drinks, before getting a lesson in the native dancing habits to make us even better double agents.
Next day we were slumming among the tourists at Trinity Collage to pick up as much data as possible for our preparation. Finally, we got to reveal the secret of J.K. Rowling’s inspiration, as we found the hidden library in the deeps of the old college complex.
The march carried on to the botanic labors, where we were able to witness slavery of all kinds of plants from all over the world, whether they are standing on the field whole day, or in the huge greenhouses sweating in the burning sun.
So much abused booty drove us emotionally nuts and we went for a quick take off, making our long way back to the base camp.
In the evening we went on spying round our camp and at some local meeting points.
At Wednesday our quest led us to the place where the Irish people craft their mysterious magic potion, to bring back enlightenment back to our homes, about the source of the Irish people´s strength. Due to our undercover skills, we even managed to taste the secret liquid they call Whiskey. The warlock, who brews it, was called Jameson.
Winged by their own weapon, we invaded the city and without them understanding our language at all we took everything we wanted, never mind whether it was their last barrel or their last hair-styling. We took their virgins and storage alike before we exhaustedly but proudly returned to our camp via a conquered vehicle they call Riccha.
Having restored our reserves, by dawn, some of us bravely joined our captains on a trip to some seemingly frightened place. Nobody, except them who went there, knows what was happening there, cause they did not say a single word about what they expired. But fortunately all of them returned in one peace, so we were able to stick to our schedule. Meaning the investigation of the shore, where we were not able to figure a way for boats from home to land, because of its rockiness ant its deep abysses. So our geographical research led us back through green and rocky hills, as some of got haunted by an urge to seek pots of gold and got lost in the wild nature for unknown purposes.
Nevertheless, we prepared for our final infiltration with the remaining Units and eventually approached their leaders, Temple. A huge red monument for their gods, where they weight whiskey in gold. Perfectly adapted to their dancing, drinking and singing habits we were able to spend the whole night on our research without blasting our cover off on last breath. Lucky to be alive we all returned safe and with experiences and knowledge no one will ever expect.
On the last morning, on Friday, we demolished our camp and worked on the last preparations for our way back, before we went for the last raid on their merchants, which they call gift-shop. Then, well-provided, we started the engines to lift off but some problems occurred, caused by an intimidating rainfall. But the captain remembered an Irish spell he took from the lips from the Warlock Jameson, „Sine Metu“, which empowered him to start off like a lunatic, since „Sine Metu“ is actually Latin, and it actually means: „Without Fear“.

There are no upcoming events at this time.